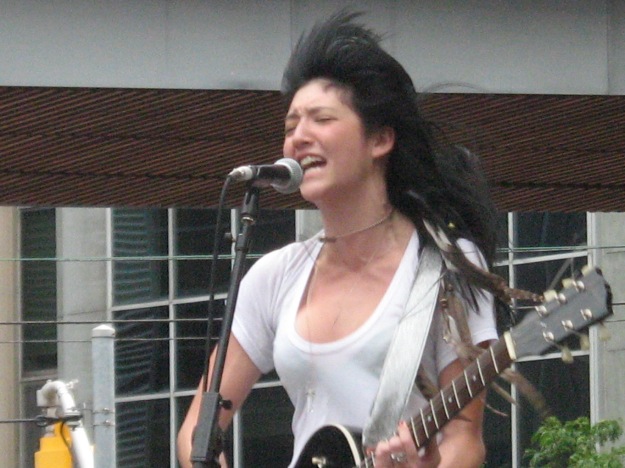 When I was renting a house with some other students a few years back, this street cat started showing up on our doorstep, every time with a new war wound from fighting neighbourhod animals.  This prompted my housemates to name him Spartacus.  He’d come, get screwed up on catnip, and leave.  In an effort of harm reduction, they eventually stopped letting him out of the house.

I always wondered if there was some kid leaning out a door dinging a dinner dish for Spartacus, but just before the start of winter break, Spartacus made a break, and this concern saw an end. Albeit, when my housemates and I returned for the winter semester – folk wisdom satisfied for the umpteenth time – the cat came back.

Hailing from Los Angeles, Queen Kwong’s multi-instrumentalist and feline empress Carré Callaway has experience with the opposite side of this kind of story. I got to talk to her after a set at NXNE and here’s what she had to say about life in cat kingdom.

Carré Callaway:  I have two cats.  One is a fat 25-pound cat named Bonzai, who’s a real scaredy-cat and the other one is a little tuxedo cat named Fubar, and Fubar’s really bad – so I have a fat cat and a bad cat.  There are so many stories.

Tom Beedham:  What kind of trouble do they get into?

CC:  They’re outdoor cats, and one time Fubar got addicted to Indian food.

CC:   Yeah. The fat one thinks he’s a vegetarian.  I try to feed him leftover fish and all sorts of stuff but he will not eat it.  He likes salad with vinaigrette, and Pringles.  I mean he’s on a strict diet – I only give him Pringles once a year on his birthday.

TB:  Right on.  People say pets are a lot like their owners. Are your cats like you, personality-wise?

CC:  [Fubar] is like my crazy bad side, and [Bonzai] is like my domesticated, scaredy-cat side.  The fat one’s neurotic and really picky about what he does and I’m kind of like that, and the other one, Fubar, eats everything like I do and you know, he’s a total badass, so I like to think that they’ve both got a part of me, even though I didn’t give birth to them.

TB:  Alright.  So Fubar got addicted to Indian food.

CC:  Yeah.  He stopped coming home because he decided to move in with these Indians that lived down my street.  I didn’t see him for two weeks.

TB:  Was this normal?

CC:  He’d go into neighbours’ houses and eat the dog food; he’d sleep in their closets; he’d eat cereal and he knows how to open cupboards, so he’d open cupboards and eat cereal; I’d get calls from neighbours that were like, “your cat’s over here eating my cereal, ripping apart my paper towel and scaring my dog.”

TB: Were they pissed about this?

CC: They all thought he was cute.  Basically a mile radius around my house everyone knew who he was.  They called him “The Mayor.”

CC: Yeah.  So basically he disappeared for two weeks and I didn’t know where he was and I was freaking out.  And one night, I came home, and I saw these Indian people coming home down the alley from me and they were like “Fubar, Fubar, come on, time for dinner,” and I stopped and I said, “Fubar’s my cat!”  And I tried to grab Fubar and he ran from me – it was really heartbreaking for a second – and he ran from me, into their apartment, because they were feeding him curry and he was really into that.  He didn’t want to come with me and I grabbed him to take him home and he was screaming, he was like, “MRAAAWR, MRAAAWR.”

TB: Kind of like one of those really bad moments at the end of all those pet movies where the pet has to choose and it goes to the wrong person.

CC:  Yeah! But I’ve had him for seven years – they’d just been feeding him Indian food.

TB: Yeah, he was curry nipped.  Does he still get into this kind of trouble?

CC: I finally got him back and now we live in a loft, so I don’t allow him outside.  He’s domesticated.

TB: A happy ending.  I guess maybe bittersweet for Fubar.  Alright. I have one last question.  What is the “truth” about Carré Callaway?

CC:  The truth about me is, I’m addicted to true crime documentary shows.