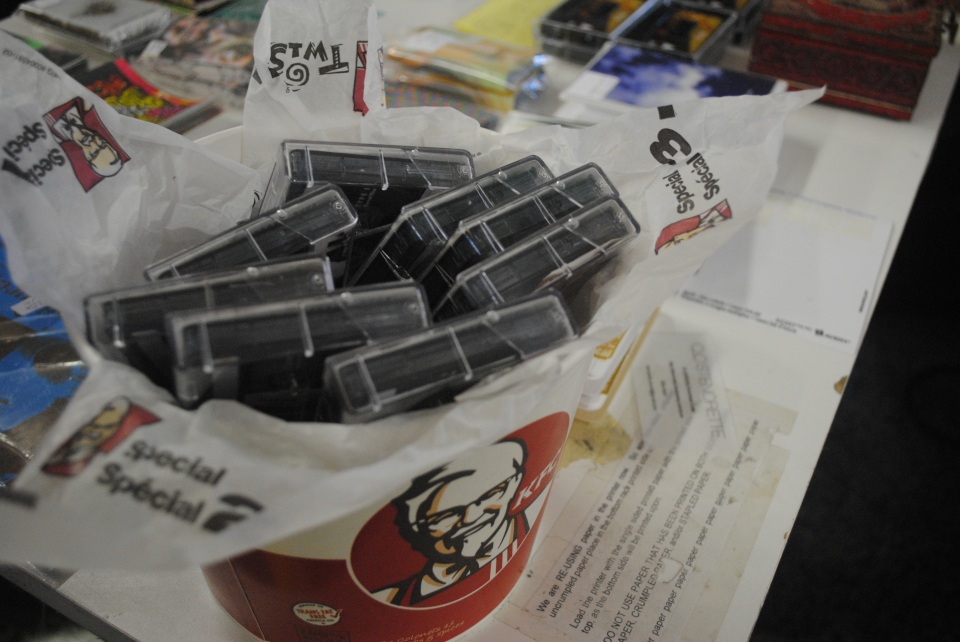 On Sept. 7, a hefty serving of audiocassettes filled a KFC bucket to the point of overflow atop a table in the Annex location of Toronto record supermarket Sonic Boom. Ripe for consumption and low in calories, what’s been dismissed by some as a stale format for decades, the audio cassette has seen something of a revival amongst recording artists in recent years, this year prompting an inaugural, international celebration of the medium – labeled Cassette Store Day (hence the format’s prominent situation at Sonic Boom on the Saturday).

Also tabling at the event were representatives of renowned indie music website Weird Canada, a publisher about to get behind cassettes in a big, $50,000 way.

After a stressful grant application process that had Weird Canada Executive Director Marie LeBlanc Flanagan up late writing (and rewriting) a proposal to the Foundation to Assist Canadian Talent on Records (FACTOR) on Valentine’s Day earlier this year, in the spring, Weird Canada was informed it would receive a $50,000 FACTOR grant to build an online store and distribution service.

“Basically what we’re going to try to do is connect record stores with bands, with fans, with labels, and send these cassettes all over Canada,” Flanagan told Burden of Salt while taking time out from speaking with consumers and those curious about the table she was working at the fair.

“Well, I feel that we as a culture, and our generation, really desire a physical medium,” said Flanagan. Speaking on the subject at a bustling record store, it was a suggestion that preached to the choir, but it didn’t yet clarify why people should be interested in what some now call an archaic recording medium.

Flanagan went on to explain that people should look to cassettes because they open doors for artists that other physical media cannot.

“We desire something physical that we can touch and collect and keep as a symbol of our music, but it’s really hard to release physical media,” Flanagan elucidated. “It’s expensive; it’s complicated; cassettes are the cheapest, easiest, actual physical, tangible media that we can access. The accessibility of technology means a lot.”

In deed, Weird Canada founder Aaron Levin has had some personal experience dealing with pressing records to vinyl.

“I put out a record and, yeah, it’s really expensive,” said Levin, leaning in front of Flanagan to get a word in. Levin also commented that the fallout from pursuing that particular physical medium can become intrusive. “When [records] don’t sell you have like 300lbs of stock that you have to live with.”

He calls cassettes “a very viable and accessible option for people who can’t release vinyl.”

Putting its money where its mouth is, Weird Canada will even roll out some cassette releases. After recording a Wyrd Fest showcase the publication threw at Toronto’s Music Gallery, the website has been granted release permissions from the venue to sell 100 cassettes of the concert, which featured performances from Jennifer Castle and Colin Bergh covering each others’ material, Zachary Fairbrother Feedback Guitar Orchestra, and Soul Sisters Supreme. They also have a project called The Weird Canada Releases, which will give rise to some cassettes.

While some have railed against the reemergence of cassettes as signaling cultural decay favouring an inferior recording medium and consumer exploitation, pointing to how less of the information recorded in a studio can be heard from cassettes when the medium is held against other formats like vinyl, Flanagan and Levin stand by the medium and say the “audiophile” argument is pushing a moot point.

“These cassettes aren’t taking away from records that would’ve been, they’re creating room for music to emerge that wouldn’t be without the cassette,” said LeBlanc. “This is a space in between for people that can’t [afford to] press a record.”

The argument also falls victim to deflation when it is brought up that most contemporary cassette releases come packaged with download cards linking the purchaser to digital recordings of the same music.

“I think people want things to sound good, but most importantly they want the result of their creative expression to exist in the world and to be enjoyed by people. And tapes are right now the best format through which to do this,” said Levin.

Weird Canada’s distro is set to arrive in January 2014.