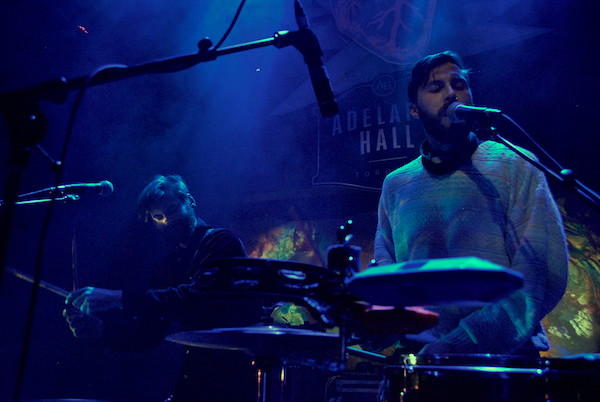 After Matrox unsuccessfully ordered the audience to disperse, Wavelength 2013 Artist Incubator participant Most People subbed in to fill a set gap left by originally headlining but New York-snowbound Marnie Stern.

For the most part, their turn at the stage saw them breathing new life into tracks from their 2012 self-titled debut, taking the hushed pop psychedelia and pumping it full of percussive enthusiasm, guitarist Paul McEachern and bassist Brandon Gibson-DeGroote seeding the stage with their fair share of drumstick shrapnel as they traded off drum duties and with them their turns at bringing physically and technically aggressive wails to all sides of their floor toms.

The heavier take on the older material might have something to do with a new direction the band’s been exploring. Most People revealed two new songs to the Wavelength audience, one of them a darker new wave listening experience for which Gibson-DeGroote requested the audience recall the opening scene of the film that heavily inspired it, The Terminator. But as to whether the harder hitting feel of the band’s live performance at Wavelength is something we’ll see carrying over to future recordings or if it’s something they’re reserving strictly for concerts is ultimately something we’ll have to wait and hear on, well, recordings.