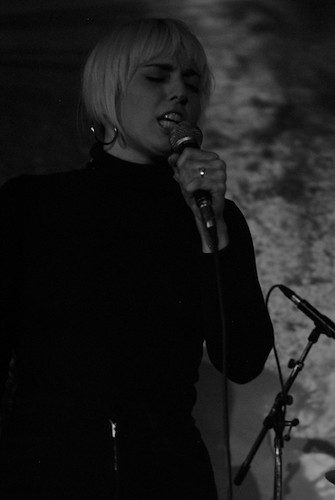 By Tom Beedham
Meghan Remy’s U.S. Girls is not unlike Trent Reznor’s Nine Inch Nails in that they are both the reclusive undertakings of independent, isolated minds. The titles imply plural involvement where in fact there is very little (if any) input coming from outside one singular source. Also not unlike Reznor, apparently, Remy has realized the utility of having a full band on hand to bring things together on a live platform.

Although Remy rounded up an outfit to perform at 961a College Street just back in December, giving further clout to the NIN comparisons, the group that assembled as U.S. Girls this time to play spacey covers of love songs—Paul McCartney and Wings’s “Nineteen Hundred and Eighty-Five” among them—for Wavelength Music Festival changed up the format again: this time consisting of Simone TB of Ell V Gore on drums, Tim Westberg of Slim Twig and Smartboys rotating through guitar, bass, and piano duties, and Biblical drummer Jay Anderson on a rattle. So while Remy seems to be open to the idea of opening the doors to other musicians, at the same time, the Feb. 15 gig made it clear she’s not about to become confined to a structure that becomes dependent on a particular lineup.