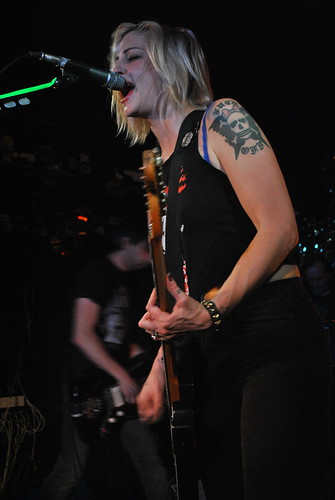 Brody Dalle performing at The Horseshoe Tavern on May 7, 2014 for Canadian Music Week. Photo: Tom Beedham

It’s always been The Brody Dalle Show
By Tom Beedham

“Another year has passed and I’m alright/ I lick the salt from my wounds and run into the night.” As they appeared on their 2002 album Sing Sing Death House, these were the words that opened the Distillers’ “I Am A Revenant.” But when the Los Angeles punk band performed that song at the gigs leading up to its dissolution in 2006, its message never could have carried the import it has resonated with at the performances lead singer Brody Dalle has given in support of her April 28 solo album, Diploid Love.

For sure, Dalle has long played the title part of that 2002 song. In 2004, the same year in which the Distillers’ Coral Fang exploded and the band embarked on a two-year tour, Dalle was dealing with the fallout of her divorce from Rancid frontman Tim Armstrong. All throughout, Dalle was addicted to crystal meth – something she wouldn’t kick until learning she was pregnant with the first of two children with now-husband Josh Homme. Then Dalle started, fronted, and released an album through new band Spinnerette. But that group never really found the traction it needed.

Still, Dalle marches on, and now the defiant zeal of “I Am A Revenant” has entirely new connotations.

With a voice famous for a rasp that seems as though cultivated on a steady intake of cigarettes and liquor, you’d expect it to have degraded over time, but that was far from the case. Swaying and spitting across the stage, Dalle was at the top of her form.

Her newest album labeled a solo undertaking, it’s encouraging to see that Dalle is now comfortable performing without the posturing of a more democratic body. The truth is, it’s always been The Brody Dalle Show.

Everybody at her Canadian Music Week gig at Toronto’s Horseshoe Tavern embraced that as they packed into the sold out performance.

Dalle seemed to acknowledge it, too.

Backed by a touring band including Spinnerette and Coral Fang-era Distillers guitarist Tony Bevoilacqua, Geddy Lee-endorsed bassist Cosmo Sylvan, and Diploid Love drummer Hayden Scott, after just two songs from her new album, Dalle & co. dove unannounced into a three-song block of Distillers tunes (“I Am A Revenant,” “Die on a Rope,” and “Dismantle Me”) and carried on with an hour-long set that balanced Distillers songs equally against new material mixed with Spinnerette’s “Ghetto Love” (dedicated to Rob Ford) and a Misfits cover (“Hybrid Moments”) for good measure.