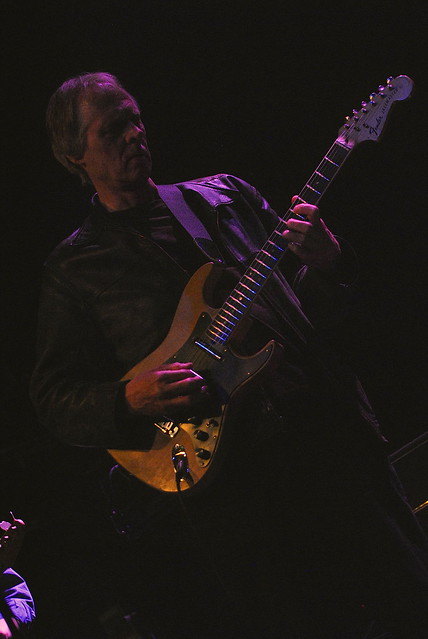 Granting a performance attracting a crowd perhaps a little too ready to strike it from its bucket list, Television rolled into town on Saturday to give a concert I hope I’ll never forget. Minus the hecklers, that is.

It only took one song (an 11-minute-long “1880 Or So,” sure) before one of those particularly entitled folks yelled for “Marquee Moon.” With $30 t-shirts bearing the title track’s album art on sale at the back of the venue, these guys set the bar kind of low, didn’t they?

What we got was so much more.

While mostly unembellished cuts from that album did account for the bulk of their set (they played all of them but “Friction” and “Torn Curtain”), Television’s CMW appearance was far from a night devoted to producing an uncanny valley. Beginning with the swirling two minutes of cosmic arpeggios and china dings they tacked onto the beginning of set opener “1880 Or So,” Television established from the get-go that this would be a night spent balancing preservation of their fan-favoured debut against less complimentary experimentation. There was their 1975 anti-single “Little Johnny Jewel,” an 18-minute rendition of that burning middle-eastern folk epic “Persia” they’ve been shopping around at recent gigs, and – although Verlaine insisted that he and the rest of the band “don’t really know it” – Television even played a six-minute version of “I’m Gonna Find You,” a commercially unavailable song from the band’s days with Richard Hell.

Fans also got some insight into the group’s influences. Verlaine dedicated Marquee Moon to “our favourite singer in the world,” Wong Fei (or “Faye Wong,” as he accurately allowed she’s “probably” recognized by here), and when the band returned to the stage after closing their set proper with “Marquee Moon,” they dug into a cover of ’60s garage act the Count Five’s “Psychotic Reaction.”

This concert was as nostalgic as it was incendiary. But it was also sobering.

As much as the band’s tight, characteristically interlocking jams (as well as the buzz about a new album) impart hope for a long future, I can’t get one particular moment out of my head: in the middle of a short but particularly twinkling ambient track the band transitioned into a close with right when “Psychotic Reaction” usually gets to be its noisiest, Tom Verlaine started shaking and massaging his left hand.

Television is back. But how long?