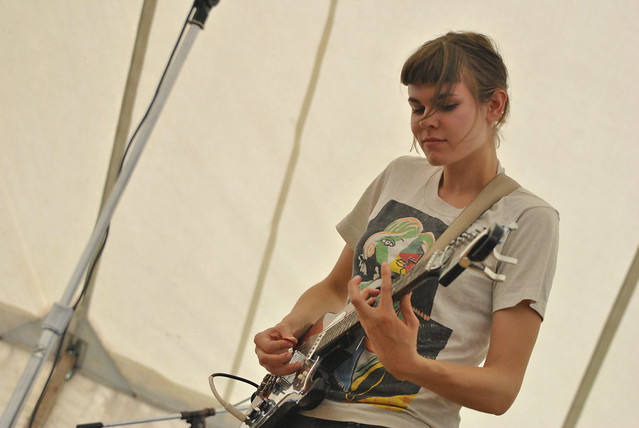 Steph Yates and Tyson Brinacombe are pretty much staples of Guelph’s “underground” music community, so it’s no surprise that Esther Grey is featured as such a prominent fixture of this year’s Hillside. They helped welcome the eager ears with a festival opening workshop alongside Amelia Curran, Bry Webb, Culture Reject, Daniel Champagne, and Fearing & White at the Island Stage yesterday, and later tonight, Yates is participating in another workshop with fellow musical nook and cranny explorers Barzin, Clinton St. Johh, and Nat Baldwin at the Sun Stage.

Earlier this afternoon, Esther Grey got a chance to plow through a proper set of its own at the Lake Stage.

Esther Grey is also celebrating this Hillside with the discharge of a special, very limited career-spanning CD compilation collecting works found elsewhere on last fall’s “Buttermilk” seven-inch, their split with Brinacombe’s other project, Tyson & His Gameboy, a 2011 CFRU compilation of local artists, and a rare, six-copy cassette released for Kazoo! Fest 2013. But seldom ones to stick to the script, Esther Grey’s sets are never extensively rehearsed renditions of their recordings. The group’s been known to improvise parts of their sets and shuffle up the deck, bringing in outside performers to keep things interesting onstage. Today that meant bringing in their friend Starr to play a keyboard that coupled the band’s tip-toed garage pop minimalism with curious sound washes and frequency wobbles. A couple of gear problems gave way to improvised sections, and the set was only better for it.

It was a performance that perpetuated a long tradition of making it impossible to walk away from an Esther Grey concert without yearning for something more – maybe it’s time for a live album from these folks.