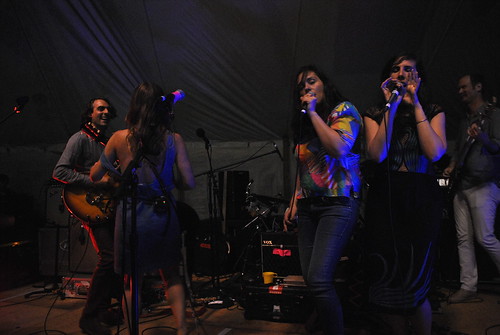 Hillside workshops are known for bringing together otherwise separate musical acts for dynamic onstage collaborations, but Hydra is an entirely different beast. Originally ushered into existence as an outfit that would help Feist showcase differently formatted material from her 2011 album Metals at the 2012 Polaris Music Prize gala (she won after that), the super group’s since established its own notoriety for also turning renditions of songs by husband-and-wife duos AroarA (Ariel Engle and Broken Social Scene/Apostle of Hustle’s Andrew Whiteman) and Snowblink (Daniela Gesundheit and Dan Goldman) into larger productions that were never possible with the hands those groups brought to their respective tables.

True, the group gets a lot of its hype from Leslie Feist’s involvement, but while fans assembled under the Island Stage tent were easily more familiar with the group’s performances of Feist’s Metals tracks, it’s not as though AroarA’s smoldering “#2” or Snowblink’s spiraling “Cyclone” – both still new tracks when their respective groups performed them at last year’s Hillside – were perceived as coming out of left field. In fact, all seven of Hydra’s heads represent Hillside alumni – even bassist Charles Spearin (Broken Social Scene, Do Make Say Think) and drummer Don Kerr (Communism, Rheostatics, Bidiniband) have performed at Hillsides past. It doesn’t hurt that Engle’s and Gesundheit’s voices vent sonic gold, either.

For all of its grandeur, the set was still wrought with production problems – Feist’s “The Bad In Each Other” had a false start, Engle’s in-ear monitors cut out in the middle of AroarA’s “#14,” and persistent feedback interrupted all throughout – but Hydra soldiered on through all of it and over the course of their performance it became glaringly certain that none of the technical difficulties in the world could hurtle a set from a group of this aptitude into a state of any significant disrepair.

They capped it all off with a fitting encore cover of Zeppelin’s “Immigrant Song” and sent everyone on their way with a fresh reminder about Hillside’s idyllic landscape: however soft the green fields that cover Guelph Lake Island, those grounds can still whisper tales of gore. Now we know the Hydra are our overlords.