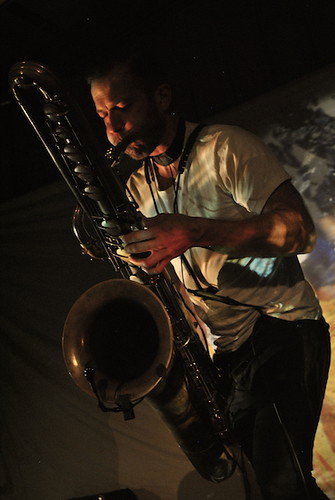 Having released the completion to his New History Warfare trilogy in April and subsequently earned a second shortlisting for the 2013 Polaris Prize, it came with no surprise that the Island Stage tent at Guelph Lake was packed for Colin Stetson’s Hillside performance.

Even if the festival horde that assembled around the stage at Hillside had done so on the grounds of base curiosity and the ambiguity of the invisible sounds provided by Stetson’s recordings failed to establish him as a force to be reckoned with in their minds beforehand, his live performance likely confirmed his status as a one-man orch-rock army.

With less than an hour of stage time at his disposal, Stetson delivered only a handful of his surreally affected sax drones at Hillside Festival, but he still managed to showcase three songs from each of the latter two volumes of the New History Warfare.

Opening with “Among the Sef,” the mournful alto-sax supported ode to octopi that didn’t have much luck coming on land, Stetson set the tone for the ironically elate crowd that would receive his afternoon performance.

He followed the song by picking up his century-old bass-sax and strapping on his throat mic for a medleyed version of the New History Warfare Vol. 2: Judges title track, a rendition that also delivered portions of “Home” and “Fear Of The Unknown And The Blazing Sun.”

Next was another bass-sax rendered number, “High Above A Grey Green Sea,” introduced with just a brief mention of the infamous 52-hertz “Loneliest Whale In The World” cetacean whose song cannot be registered by other whales (he instructed the crowd to do their own research). Stetson has dedicated the song to the sea creature since a friend told him it called into mind the whispered stories of the elusive whale.

Perhaps as a nod to the closing of his trilogy’s narrative, Stetson closed the set with the title track from New Histroy Warfare Vol. 3: To See More Light.

Setlist:
“Among the Sef”
“Judges” (including “Home” and “Fear Of The Unknown And The Blazing Sun” medley)
“High Above A Grey Green Sea”
“To See More Light”